At competition, the team is typically divided into groups, each contributing differently to the team’s success.

The pit is an area where teams station, repair, and conduct maintenance on their robot between matches. Typically only a few members (dubbed the pit crew and typically from technical departments) are allowed in the pit at a time to prevent overcrowding. Oftentimes members balance other activities like scouting or being on the drive team with their pit work. 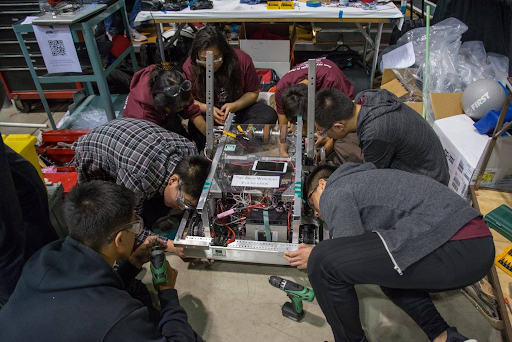 The drive team is a subgroup of the team that is focused on managing the robot on the field. The traditional drive team consists of a driver, operator, technician, drive coach, and human player, but the member roles can vary depending on the game. Each member is assigned a specific task. During build season, drive trials are held to determine drive team members.

Technician: The technician is the drive team’s resource for the troubleshooting and maintenance of the robot on the field. To help them troubleshoot, technicians should have an understanding of the systems that connect the robot to the driver station. This includes the operator console as well as the robot’s electronics, like the radio, roboRIO, and battery.

Human Player: The human player directly interacts with game pieces during matches, with their task varying between games. There can be multiple human players who can be cycled through, but only 1 is allowed per match.

An important part of any team’s success at competition is scouting, where groups of students from one team collect information on other team’s robots.

Pit Scouting: Team scouting usually involves approaching the pit crew of another team and asking a set of questions about their robot. The information gleaned from scouting helps teams with forming pick lists and guides their match strategies.

Match Scouting: Teams will also send scouters to record information about another team’s performance during matches. This is helpful for determining a team’s recent performance, which can change over the course of a competition (for example if a robot suffered a mechanism failure or if the driver was inconsistent).

Before a match, the drive teams of an alliance often come together and discuss strategy. This will usually involve assessing what each team should be doing at each stage of the match (auto, teleop, endgame), planning out routes on the field to avoid congestion, and predicting and countering the opposing alliance’s strategy.

Listed below are some factors taken into account during strategy discussions.

Much of this information should already be documented in the team’s scouting data before alliance members meet. Teams should come into an alliance strategy discussion with their own strategy in mind. Alliance discussions can be seen as a way to mesh individual team strategies and identify synergies.

After an initial set of qualification matches, teams participate in alliance selections, in which the top 8 ranked teams formally invite other teams to form a playoff alliance. Playoff alliances do not change and will persist for the duration of the playoffs, until the alliance is eliminated or wins the finals match. Teams can form pick lists to help them determine what teams they will extend an invitation to OR what teams they would accept offers from during alliance selections.

Teams are eligible to receive a number of awards at a competition event. These include technical awards like the...

To help inform their decision making for awards, FRC judges will approach teams in their pits at random to observe and ask questions on the team and robot. Due to this teams are encouraged to keep a knowledgeable member in the pit at all times, though any pit crew member should be prepared to answer questions.

At the end of each competition, a closing ceremony is held where the award winners are announced. 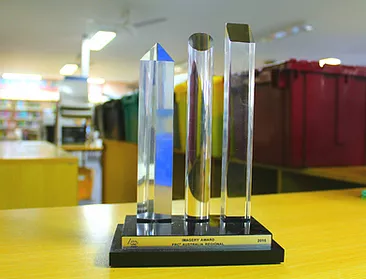 There are a variety of offseason competitions that teams can participate in. These events are often hosted by other teams in the community; examples include Team 254’s Chezy Champs event, Team 2073’s Capital City Classic event, and the Western Region Robotics Forum’s (WRRF) Calgames. Since these don’t count as official competitions, they are a great opportunity for new members to familiarize themselves with the competition environment and develop skills for the onseason.