In order to write and run robot code, we will need to install a few pieces of software.

The WPILib suite installs the IDE we write our code in as well as the tools needed to run and deploy that code to the robot.

Follow the instructions on the official WPILib documentation for your respective OS. This will install WPILib and all its required tooling, as well as the VSCode IDE that we use to write code.

We use Git and Github to keep track of and collaborate on code.

If you do not have a Github account, create one now.

Once you have your account, tell a programming mentor or programming lead your username so they may add you to our GitHub organization.

Next, set up your username (your real name) and email in Git by following these instructions:

Bring up the Visual Studio Code command palette with Ctrl+Shift+P:

Then, type “WPILib” into the prompt. Since all WPILib commands start with “WPILib,” this will bring up the list of WPILib-specific VS Code commands:

This will bring up the “New Project Creator Window:” 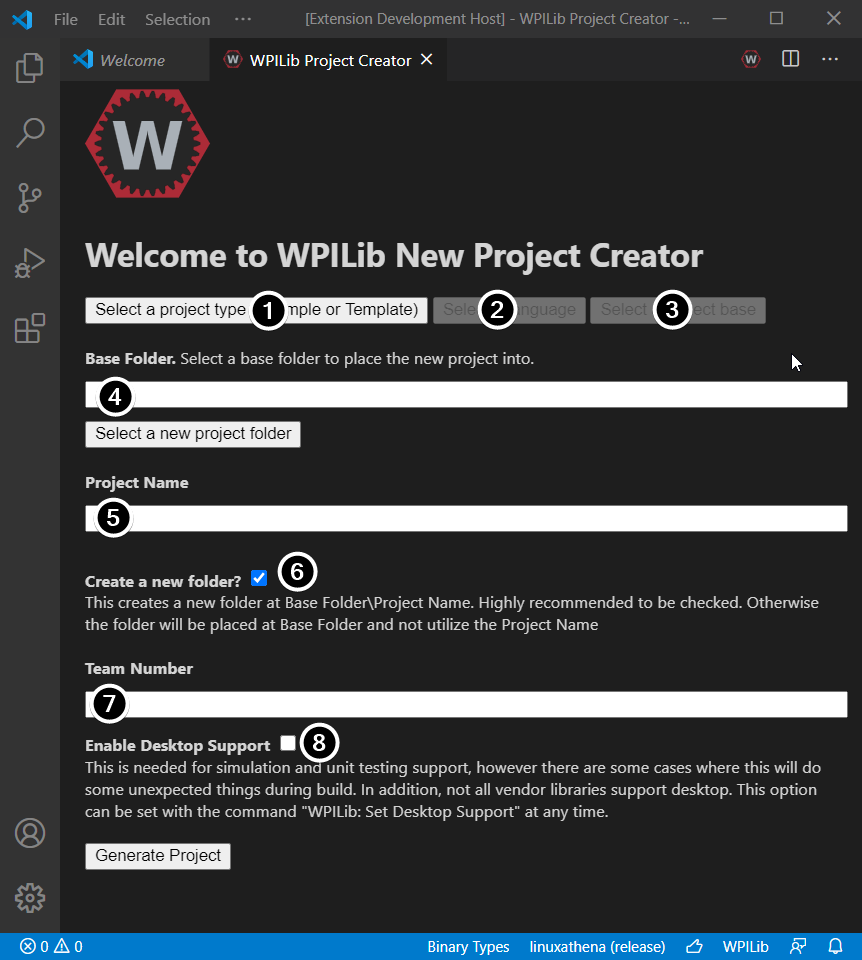 Some elements we care about are explained below:

Once all the above have been configured, click “Generate Project” and the robot project will be created.

After successfully creating your project, VS Code will give the option of opening the project as shown below. We can choose to do that now or later by typing Ctrl+K then Ctrl+O (or just Cmd+O on macOS) and select the folder where we saved our project.

Once opened, we will see the project hierarchy on the left. Double-clicking on a file will open that file in the editor.

It's a lot, so let's break it down. This is an intro to our robot structure, so we won't go into specifics on how to actually write the code until the next section.

When creating a robot project, Gradle will automatically generate the files build.gradle, gradle/, gradlew, gradlew.bat, settings.gradle. You shouldn't ever need to touch these. Your IDE may also generate the folders bin/, build/, .wpilib/, .vscode/, and .idea/. It's safe to ignore these files as well.

The vendordeps/ folder in our robot code contains .json files that identify third party libraries we use. You can read more about it here.

Just like any other Java project, the src/ directory holds all of our actual code.

This file is autogenerated, and there is rarely any reason to touch this file at all. It contains the classic main method, which is run at startup and starts up the rest of the robot code.

This file is the control center of the robot. It has the methods that are called to run the robot. Documentation on each of the methods within it can be found here.

This file contains all the numbers that don't change and are relevant to the whole robot. This includes all ports and joystick buttons, which correlate to motor controllers, solenoids, and commands in the code.

This is where we create and store the objects for the subsystems, and set up all the controller and joystick commands that the driver uses to operate the robot. It does not extend from any superclasses, and is mainly used as a way to separate code from Robot.java

Commands are what run the robot. For example, there may be a RunIntake command that runs two motors to turn the wheels that intake a game piece.

Subsystems are another name for robot mechanisms, such as a drivetrain, a shooter, an intake, or a climber. The subsystem classes contain the Objects for the motor controllers and solenoids and have methods for controlling the subsystem, which are used by commands.

Deploying code to the robot¶

Deploying code to the RoboRIO only works on a Windows computer; however, you can still build your code to see if it compiles correctly.

Now that you've created a robot project, you may want to deploy your code to the robot. In order to do this you'll need a few things:

Without the radio: Plug the computer into the RoboRIO using a USB-B cable.

Now you know how to deploy your code. Let's learn how to interact with physical components of the robot.

Java has a standard documentation format that is autogenerated from documentation comments in the code. We will be referencing them extensively to write our code.

On top of a Javadoc contains a description of the class, its package, what it inherits, and more. Below that is a section containing the class' constructors, and the section below contains the methods you can call from that class. If you click on any of the constructors or methods, you get directed to a section with more details about what you clicked. Here's a Javadoc of a class you should be familiar with: ArrayList.

WPILib is the name of the library FRC provides us to control the robot with. Its JavaDocs are located here (and you can also find a link to them in the Resources page of this site). We will be mostly using the library's edu.wpi.first.wpilibj package, and you can search for a class or method using the search bar located in the top right corner of the javadocs page.

First has a pretty good write-up on command-based programming, so we'll read that. Once you're done, we'll practice writing some basic commands.

If you have access to a robot and would like to test your code, you will need the following items:

Ask your teammates in the electronics department for help :)

If you are new to git, read the intro to git section before proceeding.

Clone the TrainingRobot project, and open it in VSCode. You can check if you have got the right project open by deploying the project to the robot and pressing the X button on the controller. If the motor spins, you've got the right code!

Please don't actually push any of your changes to the Github repository.

Let's change the button to trigger the command continuously while it's held rather than when it's pressed.

In the same project, you'll find the RunMotor.java file in the commands/ directory. In the RunMotor class, the end() method is currently empty. Add code to it that stops the motors.

Once you think you figured it out, follow the above Deploying robot code section again to deploy, and see if your code worked!

Right now, our motor only has two states: half power, or completely off. Let's make the motor's speed correspond to more granular controller input using a joystick.

Again in the RobotContainer.java file, modify the bindIO() method to set the default command of the Motors subsystem to the RunMotors command.

Again, deploy your code to the robot to see if it worked! Once you're satisfied with your changes, read the Git Flow page to push your changes.