FIRST (For Inspiration and Recognition of Science and Technology) Robotics is an organization that holds international high school robotics competitions. Each year, teams of students are challenged to raise funds, design a team brand, and engineer an industrial-sized robot to compete in a field game against other teams. Teams can also have mentors, who are professionals that volunteer and lend their expertise to guide the team.

“It’s as close to real-world engineering as a student can get.”

What Is The First Robotics Competition?¶

The FIRST Robotics Competition was founded in 1989 by inventor and entrepreneur Dean Kamen and retired MIT professor Woodie Flowers. Dean Kamen was unhappy with the number of women and minorities who did not consider STEM (Science, Technology, Engineering, Mathematics) careers. The first competition season was held in 1992. 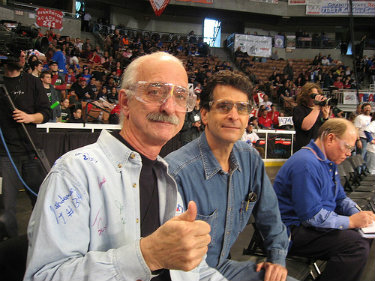 The FIRST Organization also holds competitions for students of varying ages. These include the...

There are two competition models which a team can opt into: regional and district competitions.

Regionals: Teams begin by signing up for and competing in one or more regional competitions. Any team can attend a regional, and it usually houses 40-70 teams. By winning regionals, each team in the winning alliance (group of three teams) receives a ticket to the championships. (We use the regional model.)

Championships: Teams from all over the world meet at the championship event and compete. The winner is automatically given a ticket to the next year’s championship. Past championships were held in cities such as Houston, Detroit, and St. Louis.

Competition events will oftentimes include extra activities for members to participate in. These include workshops and panels, where students and mentors present and discuss FRC related topics. Competition is also expensive (transportation, food, housing, sign-up fees, etc.), so teams spend time fundraising throughout the year.

Winners for both regional and championship competitions, as well as select awards are awarded with a blue banner.

Community Events: Aside from regional and championship events, members in the community also hold their own competition events. Examples include...

FIRST has two main philosophies which it encourages its members to adopt not only during the time they spend in the program, but into their own lives.

“They avoid treating anyone like losers. Knowledge, competition, and empathy are comfortably blended.”

Coopertition is displaying unqualified kindness and respect in the face of fierce competition. The idea is founded on the philosophy that teams can and should help and cooperate with each other even as they compete. Coopertition involves both learning from and teaching teammates. It is learning from mentors, both managing and being managed.

To learn more about the FRC, check out the FAQ here.