Make it to playoffs at a regional level.

Here are our expected capabilities for alliance robots during the playoffs. Our robot is designed around being a first pick.

The climbing mechanism is a top priority for our robot.

A spinner mechanism for the Control Panel was of low priority

We chose to design a shooter mechanism that could score high-goal as quickly as possible.

We decided that it was extremely valuable to take advantage of the autonomous double point scoring period. 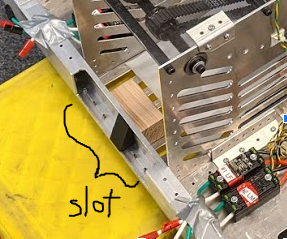 The cut allows for power cells to be taken into the robot while still maintaining contact with either the ground intake and conveyor belt at all times without having an open chassis (shown below). 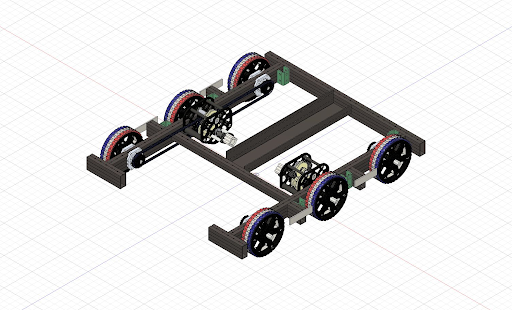 Unlike closed chassis bots, open chassis bots do not require a ball to be raised above the front chassis frame.

Each side of the drivetrain is driven by a WCP SS gearbox with two falcon 550 motors geared at a 10.42-1 ratio. This helps achieve the robot’s max speed of around 13 ft/s.

We had two main prototypes: a hooded shooter and a linear shooter.

We decided to go with the hooded shooter, as the hood increased the number of contact points between the mechanism and the power cell.

We were concerned that any variation on the power cells, such as a tear or hole in the power cell, could drastically decrease the accuracy of our shots.

The final shooter design consists of...

Hopper vs Conveyor vs Ramp

We tested a shallow, gravity driven ramp, but decided that the speed at which the power cells feed into the shooter would be slower than we wanted.

Concerns about the hopper’s potential to jam balls led to the conveyor being chosen over it.

We built a wooden prototype of the conveyor, but found that the single NEO brushless motor wasn’t powerful enough to move the power cells through the system, so we settled for a two motor system.

The final design is a conveyor that files power cells one by one. The conveyor is broken into two separate sections and has an "L" shape. Each section has a single NEO motor geared similarly to the shooter to minimize energy transfer between the shooter and the balls.

The vertical section consists of a single conveyor with 0.5in compression to move the balls upward into the shooter wheel. This section automatically stores two balls vertically. 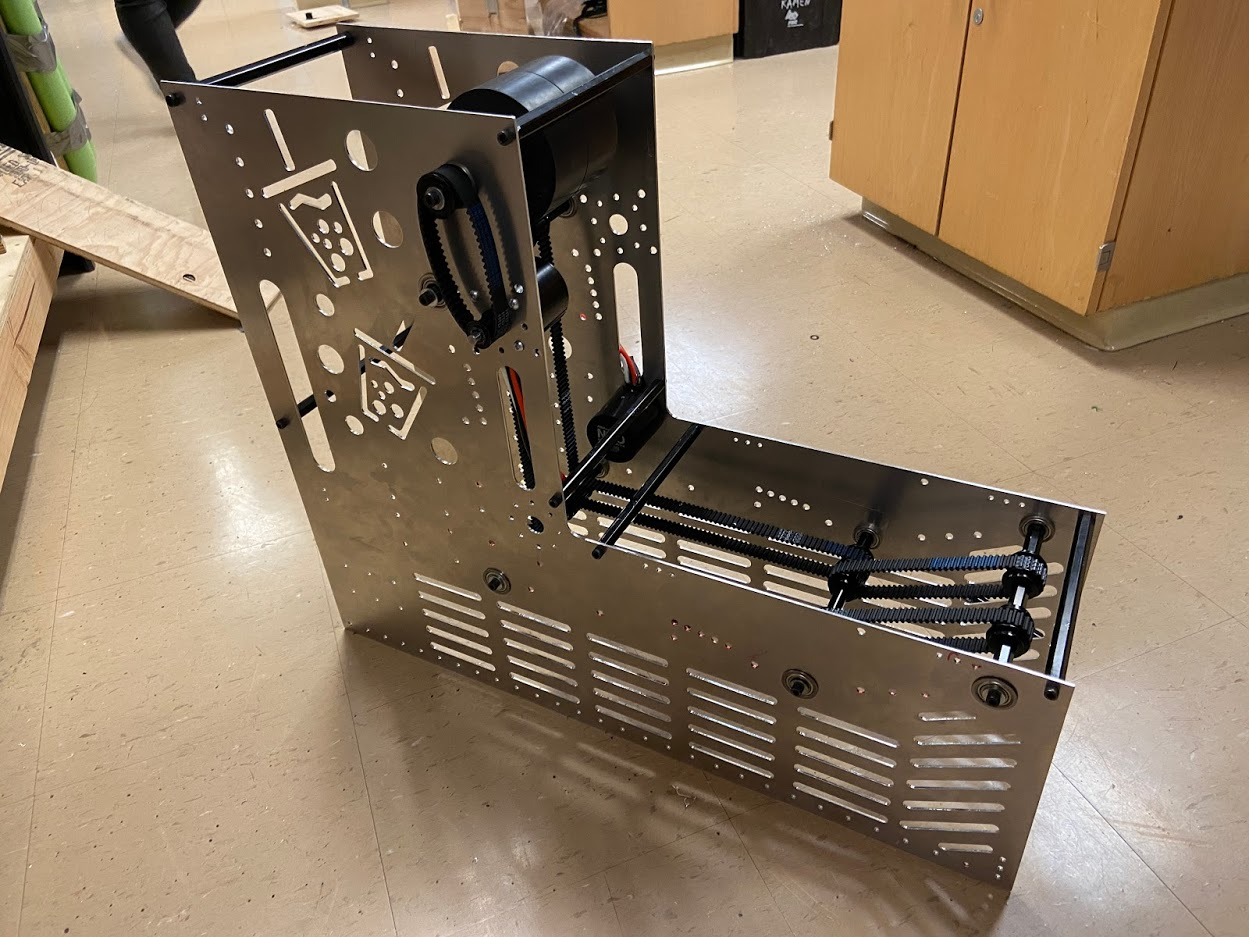 To find the types of the wheels, height of the intake, and distance of the intake from the bumpers, we drove a hex shaft with a drill, varying the wheels and relative distances until we found the combination that would allow the power cells to be rolled up into the chassis.

We realized that because the intake is only actuated by a motor on one side, the other side would not follow and retract into the robot, resulting in one side sinking down, or an asymmetrical intake.

We solved this issue with a set of inner intake arms, connected by a churro shaft. 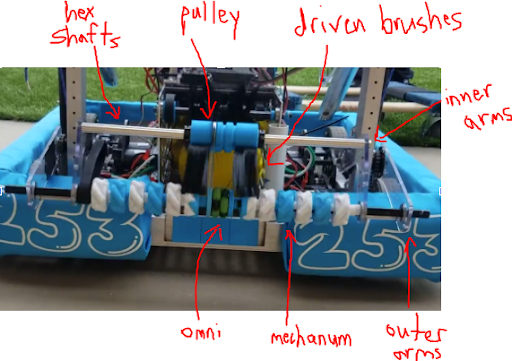 The final ground intake has…

Telescoping Cascade vs 4-Bar Arm vs One Point Pivot

The telescoping cascade was prototyped out of PVC and thin cable. It worked well, but would require us to either sacrifice not being able to fit under the trench, or build at least four stages to reach our target height.

The 4-Bar Arm also worked effectively, but was eliminated for its complexity.

Our final design is a one point pivoting climb with…

To Extend the Arm

To Retract the Arm